I’ve had a lot of people ask me about AIP; what it is and why I chose it as a treatment approach for autoimmune disease. I talk a lot about it because it consumes so much of my life. But I realize that not a lot of people know much about it. So I wanted to clear the air, so to speak. Actually, what I really want to do is spread the word. And in order to do that, I have to share my story. So allow me to elaborate.

I spent the majority of my adulthood, and part of my adolescence, dealing with unexplained and undiagnosed health issues. I spent countless hours googling, researching and attempting to diagnose myself. I was bounced from doctor to doctor, underwent unending diagnostics, blood work and even surgeries. I never got answers. And I never got better.

I did begin to learn a lot about my body and the likelihood that I was probably suffering from an autoimmune disease. My primary care doctor and two rheumatologists told me that they suspected Lupus, but no one was ready to make a diagnosis. I had symptoms that were atypical to Lupus and more in line with other autoimmune diseases, only those antibodies were not present. Only the Lupus antibodies were present. But I did not receive a diagnosis of Lupus. Only a reassurance that it was possible, even likely, but not certain. Just this scary word, this scary future, being thrown at me. So still, no answers. And without answers, no treatment. Actually, that’s not entirely true. I had an arsenal of meds that only made me feel worse. But there was no clear treatment PLAN. Just a continuously growing list of prescription medications and unexplained symtpoms.

The more I suffered, the more I was forced to become my own advocate. I sought out to learn about autoimmune disease, what causes it and how to treat it. I started to read about the Autoimmune Protocol and it’s ability to reverse these diseases and put symptoms into remission. It seemed far better to me than a life sentence to steroids and poor quality of life. But, it was a drastic change. And without that coveted diagnosis, I wasn’t sure it would be worth it. I didn’t even really know WHAT was wrong with me, so why undertake something that BIG if it may not even work?

I tried to eat healthy, clean food most of the time. It helped, to some degree. But I didn’t understand the scope of what was happening inside my body. I was working out really hard. I was drinking wine regularly. I was staying up way too late. I was putting my child’s needs before my own. I was dealing with ongoing stress triggers. I was spending hours in the sun. I now know that ALL of those things can send autoimmune disease into an out-of-control flare. But I didn’t know that then.

This past year, it all caught up with me and I became sick. Sick is a word I despise. My son walks around pretending to be “sick” and it’s gut-wrenching. Sick is a word that’s used far too often in my home, and it’s a part of our daily lives. I hate that with every ounce of my being.

My body shut down in August. It started to reject everything I put into it, and onto it. It just wouldn’t function. I was lost and desperate. I needed to find answers and, more than that, I needed to find help. I had exhausted all of my options in mainstream medicine, and lost all of my faith that my help would come from there. I prayed for direction. And in the midst of an episode of acute nausea, vomiting, insomnia and incessant googling for answers, I found it.

I filled out an inquiry in hopes that Dr. Cole would see me. Dr. Cole is a Functional Medicine Doctor who specializes in treating unexplained conditions on the autoimmune spectrum. He sees patients across the globe via Skype, but his office happens to be 10 minutes from my house. He takes on only serious cases and only cases that he believes he can treat successfully. I had grown accustomed to being told “I can’t help you” so my expectations were low, but still I had hope.

I got the call back for an evaluation and met Dr. Cole a week later. He was kind and knowledgable. And he LISTENED. He listened to my concerns, he believed them and he understood what they were. He was able to tell me what was happening with my body right away. It was a tremendous relief, until he went over the treatment plan with us and, ultimately, what it would cost. I broke down right there. How could God drag me through all of this, and finally lead me to an answer just to tell me that I couldn’t have it? I wasn’t going to get better, ever.

My husband and I left the office without speaking. I just prayed. I prayed with everything in me that God would provide a way. And He did. After sitting down and looking at our options, we were able to make it happen and I began treatment a few weeks later. I knew that the biggest part of my treatment would be adopting the Autoimmune Protocol (AIP), in addition to herbal supplements, vitamin supplements, natural medicines, fasts, and the like. I was ready, though. I didn’t have a choice.

AIP stands for the Autoimmune Protocol. It’s a variation of the Paleo diet and it’s used to treat Autoimmune disease and conditions on the Autoimmune spectrum. AIP is an elimination diet that excludes any and all foods that cause irritation to the gut. The diet does not allow ANY ALCOHOL, GRAINS, DAIRY, NUTS, SEEDS, LEGUMES, NIGHTSHADES or spices/seasons containing any of the previous. It is not for the faint of heart. But, since nearly all of your immune system lies within the gut, almost all autoimmune response begins their as well. This diet is the only way to HEAL the body rather than masking the symptoms of autoimmune disease, but it can take years to put the body into full remission.

In my case, my gut was so severely permeated that everything I ate caused further irritation and allowed undigested food to leak into the bloodstream. Undigested food is TOXIC to the blood. Blood cells have to work overtime to break those toxins down. This is where my body learned to attack itself. My blood cells were working so hard to combat the constant flow of toxins into the bloodstream that they could no longer distinguish what was healthy and what was unhealthy. They started to attack everything, including other blood cells. Once that faulty process began, it became impossible for my blood cells to properly absorb and transport vitamins, nutrients, hormones, etc. So now I’m left with a number of chronic deficiencies that play out in a number of different ways. In addition, that learned autoimmune response has spread to my stomach, skin cells and possibly other organs as well. The extent of the AI response in my body is unknown.

The AIP diet essentially allows the gut to heal by eliminating irritants and gives the immune system an opportunity to calm down. The hope, of course, is that some foods will ultimately be reintroduced successfully. But there is no guarantee of that and each case is different. As I stated above, the healing process can take years. I am working with Dr. Cole toward a one-year goal of remission. I am doing everything in my power to reach that goal. I began treatment on November 4th and I’m 3 months in. I’ve had quite a few setbacks, and also a few victories. I am making progress, slowly but surely. And I have my eye on the prize. I know that this is the only option for me if I want to be healthy. I know that this is the only path to a happy, fulfilling life. I’m far too young to throw in the towel on health. My husband and son deserve the best version of me and that is what I’m fighting for.

I know that medical science is the prominent source of treatment in today’s world. But medical science failed me. And it’s failing others just like me everyday. Modern medicine is decades behind when it comes to diagnosing and treating autoimmune disease and unidentified AI spectrum conditions. The reason for that is because of it’s model of care. Did you know that much of what is learned in medical school is pharmaceuticals and that pharmaceutical companies actually support a large number of medical schools financially? What are the implications of that? Medical doctors are trained to diagnose a condition based on a clearly indicated list of symptoms, and then match that diagnosis with a corresponding medication. That means that if a person’s symptoms do not fit perfectly into a diagnostic box, they will likely not be diagnosed. At least not easily. Even if said person does happen to receive a diagnosis, it’s likely to be as simplistic and inadequate as the corresponding Rx used to treat it. Medicine should not be aimed at disguising illness, but rather at finding the root cause of the problem and working to heal the body. And medicine should not be one-size-fits-all. Every person, every body is unique. That has never been truer than in dealing with the AI spectrum.

Now that I’ve bored you with that, let’s just bring it back around to WHY I am sharing this. I DID find answers. I found them by going outside of mainstream medicine and seeking a doctor who truly understands the way all bodily systems work in conjunction with one another and how to treat chronic illness as a whole. Not everyone will be able to afford to see a functional med doc, and that’s unfortunate. But there is a movement building and perhaps the American model of care will begin to shift. Until then, there is the Autoimmune Protocol.

AIP can be adopted by anyone at anytime. There is a wealth of knowledge, evidence, insight and resources available on the internet about AIP, how to begin and why. I won’t lie to you and say that it’s an easy change to make. It’s not. It comes with an off-and-on sense of deprivation and isolation. But it carries the promise of a better future, and that makes it worth it.

If you’ve been diagnosed with an autoimmune disease, or if you’re dealing with undiagnosed chronic illness or suspect you may fall somewhere on the AI spectrum and are interested in learning more about AIP and how you can fit it into your life, please feel free to contact me.

Many prayers and blessing for health & happiness. 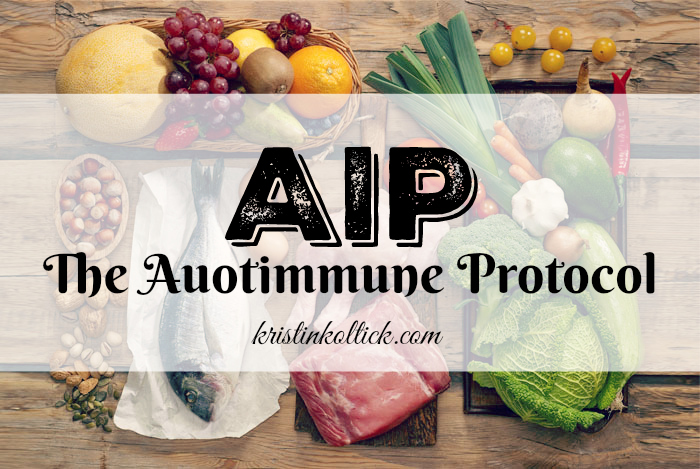