And Life Goes On.

I’ve been struggling to come to terms with the aftermath of the last five years of my life. It’s been difficult coping with a debilitating illness, new motherhood, life after a failed marriage, single motherhood with a debilitating illness, etcetera.  I’ve also faced some unique challenges in being forced to deal with these things in a largely public way. In fact, I’ve received so much criticism that, despite my thick-skinned and fire-signed nature, I find myself in the midst of an unfamiliar introversion.

I have prayed countless prayers about how to regain my hope, my spirit, my passion and, on a deeper level, my relationships and reputation for being a cultivator of change. I’m at a loss. While I have taken the necessary time and energy to pick up the scattered pieces of my personal life and place them, as best I could, back together ~perhaps with a little duck tape and more than a little wine~ my business and public life remain fractured. And I need to address it. There are far more people than I have the ability to explain or apologize to individually, my hope is that this space can become my haven for recompense, for renewal, and for rebirth.

Seven  years ago, my world was turned upside down when I suddenly and unexpectedly became very sick. I suppose that sort of thing is never expected and always sudden. Everything I had worked so diligently for, everything that I was, was taken away from me, piece by piece. I was powerless to do anything more than watch, like the passerby of a horrible traffic accident. It felt surreal. But it was also survival, in its rawest form.

I managed to claw my way out of it, to some extent, for a short period of time. I was over-medicated and undermined, but life went on to a manageable degree. And I became a mother. A prodigious blessing, however unexpected. A life changing event, gift, experience, purpose. But motherhood inflamed, quite literally, my body’s inability to function properly and despite the arsenal of prescription “management”, I quickly became very sick, once again.

I learned a very difficult lesson throughout this season of my life. Well, maybe a few lessons. But the one that has been ingrained most deeply is the dichotomy of being labeled with a chronic illness and not having that label. At the times when I became critically ill, I was still living life without an official diagnosis. And that state of limbo was an arduous place to exist.  It was easy for the people around me to dismiss what was happening to me, to make light of it. From an outside view, I didn’t look sick. I appeared normal, healthy. Only my husband, who shared that formidable space behind the walls of our home, understood how sick I truly was becoming. Without a diagnosis, without a label, most of the people around me simply thought I was being overly reactionary. It was very isolating, and after a time, I grew weary of trying to explain my blank stares, sudden departures and excessive absences. It was just easier to survive within my own hell than to attempt to bring anyone else into it.

For several years, I struggled to be a wife, to be a mother, to get out of bed. But I found saving grace in building a business that allowed me to help other people live healthier lives. I became so fiercely passionate about it, that in some ways, I neglected an already crippled marriage I barely noticed was on the verge of collapse. Until it did.  And once again, my world shifted violently into someplace unfamiliar and unclear. For several months, I tried to maintain the charade of being a professional cultivator of inspiration. But behind the screen of Facebook and Instagram, I was acutely struggling to find my own. And so I made the decision to come clean.

I don’t regret that choice. I am, and always have been, an open book. I believe in being who I am, unapolagetically. But the decision did not come without recourse. During the most intense period of tribulation of my life, I was harshly criticized, judged, insulted. Because of that, I began to withdraw from my business, from social media and even from my personal relationships. I was terrified of the vengeful disapproval. And it was everywhere, about everything that was my life, or what people perceived my life to be.

Don’t get me wrong. I’ve been the charmed recipient of far more love and support than the latter. And I am so grateful for that. It’s been my anchor. Despite my eternal optimism, I’ve somehow allowed myself to become a victim of the hearsay and judgment. I’ve let it change me, and rob me of the things I worked so hard to reclaim. My health, my relationships, my passion, my vision. But, as we all know, life goes on. We cannot live safely in the past, but rather, we must step through fear into a hopeful future. From this moment, I am leaving the past where it belongs, I’m closing the door on my failures and walking forward in faith. Because there is no other choice. I refuse to throw in the towel.

And so I write this as a letter of apology, as a declaration of betterment, as an oath of restoration.

Life goes on, and we are all the better for that. 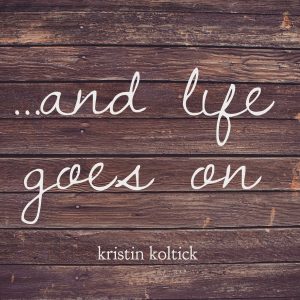